I’ve done public art for several years and have pieces around the Midwest and West. I work tirelessly on understanding and incorporating ideas, concepts and learnings from all around.  From India came a deeper understanding how people connect to names and from the Native American Dakota came an appreciation for place.

I joined a group of artists at the Vesper Atelier, an outcome-based educational non-profit for artists interested in honing their craft for public art commissions.  Vesper’s mission is Art in Earth and this concept runs deeply through my work and is a common thread needed in today’s communities. I’ve since earned a Diploma in Ecological Sculpture and have continued on as a Lead Sculptor. 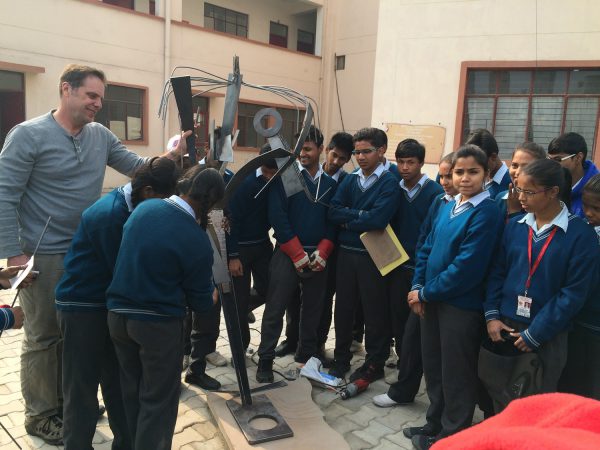 15 I took a life-changing trip to India with my Vesper colleagues. We partnered with an organization called YouthReach (www.youthreachindia.org/). Via YouthReach we connected with a group of 15 year old boys and girls at the Vidya School in Gurgaon to concept and create a sculpture.  We taught them how to create and execute a piece of public art from concept development, material selection, site planning, welding, troubleshooting and long term maintenance planning. We learned more from them during our time together than we ever imagined possible.

My art often showcases the interactions between earth-based materials, with natural finishes softening hard man-made materials, as well as the mingling of Western and Eastern cultures.  I’ve always been fascinated with the East and have chosen to experiment with techniques and concepts originating there.  Wabi-sabi is the acceptance of beauty infused by the imperfection as a reflection of our lives and loves.

Honestly, though, sometimes I just do it because it’s fun.

“It is not the critic who counts; not the man who points out how the strong man stumbles, or where the doer of deeds could have done them better. The credit belongs to the man who is actually in the arena, whose face is marred by dust and sweat and blood; who strives valiantly; who errs, who comes short again and again, because there is no effort without error and shortcoming; but who does actually strive to do the deeds; who knows great enthusiasms, the great devotions; who spends himself in a worthy cause; who at the best knows in the end the triumph of high achievement, and who at the worst, if he fails, at least fails while daring greatly, so that his place shall never be with those cold and timid souls who neither know victory nor defeat.”